skip to main | skip to sidebar

Our team did a 12 hr race at Hanson Hills Recreation Area. Justin, from our team is the Operations Director for this facility. Unfortunately I was unable to race this one due to other commitments. We were fortunate enough though to find a good replacement for the team.

Before this race we were in the first place standings for the Michigan Endurance Cup series. We just needed to basically finish this race to stay on top of the point series. This was pretty much a "fun" race for our team.

We battled with another team all day and pretty much rode our race. All the riders did very well and we kept the top position in the points series.

This race pretty much solidified our standings for the year. We ended up winning the overall title as the number one team for the Michigan Cup Endurance Series 2007.

What a great year and a great feeling knowing we accomplished our goals of becoming a winning team.

Next race...Iceman in November.
Posted by EDimaguila at 10:38 PM 1 comment:

Pando is an old ski resort near Grand Rapids MI. The course was a 5 mile lap, which was done at a high rate of speed (basically sprinting the whole time for 12 hrs). The loop starts with a sprint up the 'front' slope of the ski hill and immediately turns 180 degrees to come right back down along the tow rope line. Then it heads around the back on some two track, throw in some reasonably fun singletrack, a climb and descent on another ski slope and you pretty much have the circuit.
The start of the race... 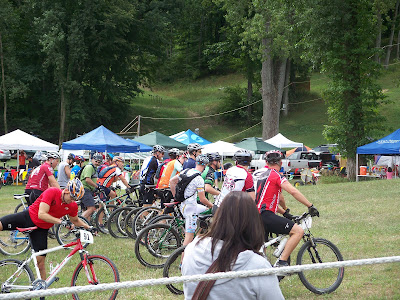 We end up getting the hole shot right from the start and so begins the race. 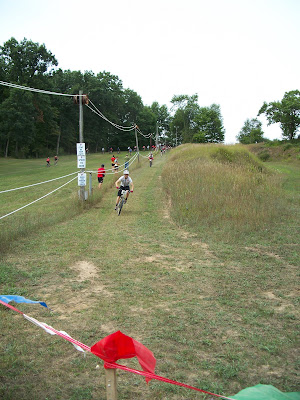 Once the race was on we took turns doing 2 laps each. As the day progressed, we settled into a battle with a west coast team that was nip and tuck all along. When late afternoon rolled in so did the clouds and rain. It ended up getting pretty chilly at night.

I definitely took this course for granted. I figured, short laps, not too much climbing (so I thought). Man was I wrong. I started to disintegrate towards those late night laps...the downpour of rain and cold weather started to do me in. I felt major cramping in my legs and back.

When all was said and done we ended up having a controversial race ending. It turns out, the other team we had been battling all day had a technical going into the last hour of racing. Up until that point they were up on us. When they came off the course to deal with there mechanical, per race rules they were to start that lap all over again. Well since we were on course already we technically would have been ahead of them. Unfortunately the course lap counter coupled with some mis-communication screwed things up and they counted there lap anyways.

The promoter was to do some investigating in the matter. Oh well, we know we ran a damn good race. Case closed, on to the next battle.

Posted by EDimaguila at 10:12 PM No comments: